We spent 5 days in Dubrovnik, Croatia with our Children and we all had a great time. Dubrovnik is REALLY kid friendly. There were times when a blind eye was turned to paying for the kids (airport shuttle bus, old city wall walk, aquarium and local buses).  The old city is great for exploring and you can always pick up a snack or an ice cream to keep the kids going.  We found the area of Lapad Bay was especially good with beaches, parks and restaurants along the pedestrian promenade.

The local buses were great and very easy to navigate, though be prepared to stand if you’re getting on the bus at a mid-way point!

We always try to learn at least three words while traveling to countries and encourage the kids to learn and use them too.  It makes a big difference when engaging with the locals and they appreciate the effort.   Here are the words we learnt and used:

Here’s what we did day-by-day and if you plan to visit with your kids too maybe you can get some ideas for your travels.

In arrival we took the Atlas shuttle bus from the airport to Pile Gate which is an inexpensive way to get into town.  We were staying in Pervanovo Apartments in the Babin Kuk area of Dubrovnik. As we were not sure of the exact location of the apartment we took a taxi there from Pile Gate. The two bedroom apartments were very spacious and had everything we could possibly need for our stay.

A short walk down the hill from the apartment is Copacobana beach and this is where we headed for the afternoon. This is a pebble beach with a cafe and restaurant on site and provided the first opportunity for the kids to get into the sea. They had beach shoes which helped with the pebbles. The adults struggled barefoot!! We had a nice meal at the restaurant before the kids had ice cream. On the walk home we noticed the nearby campsite had a small park so we let the kids burn off some more energy on the swings there.

When we left the apartment this morning to catch the bus to the Pile Gate the rain was lashing down.  The bus stop is a 10 minute walk away so by the time we had got there we were already soaked.   When the bus arrived at Pile Gate, the entrance to Dubrovnik Old City, the rain showed no signs of stopping so we bought ourselves some ponchos.

We wandered randomly around the Old City until we found one of the three places that allow you to climb up to, and walk around, the city walls.  It was still raining which made some parts of the city wall tricky to navigate as it was slippery, but the views over the city and the sea more than made up for it.  We didn’t make it around the whole city with the kids but we did manage two thirds of it before descending the stairs back at Pile Gate. 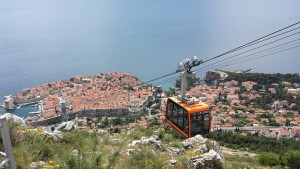 After stopping for lunch in the Old City we made our way to the Cable Car and ascended up for great panoramic views over Dubrovnik.  There was a small amphitheater at the top where our kids put on a mini-performance for the few tourists who were sitting in the sun!

We made our way back to the apartment late in the afternoon and the kids had a great time at the campsite park again.

The weather forecast looked gloomy again for today so we had made a plan to visit the Aquarium in the morning.  As it turned out the weather forecast wasn’t correct and we were blessed with a nice sunny day.   We still went to the Aquarium, which is situated in the Old City.  It is only a small Aquarium which didn’t take us long to look around, however the children loved looking at the marine life.

We had heard good things about Lapad Bay, especially for children so we took the bus there (via a park the kids had seen near the harbour and wanted to play in).  We were immediately impressed as we walked down the pedestrian walkway lined with restaurants and parks to the beach.

The beach was split into two sections, and we wandered over to the far section, mainly because we were looking for somewhere to change into our swimwear.   This section of the beach had big pebbles, which were difficult to navigate when wearing no shoes.   Our daughter was unsure on her feet in the wat 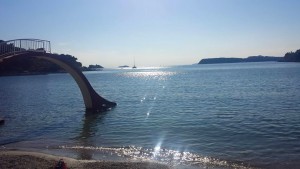 er on the pebbles so we decided to head back to the first section, which looked like it consisted of smaller pebbles.  Turns out this was a good move.  There was a slide into the sea, and next to this slide we found that the sea was actually very sandy.  With no pebble issues the whole family entered the sea and had a great time splashing about in the sun for the remainder of the afternoon.

Today we caught the bus to the Old City again, this time to catch the local ferry to Lokrum Island.  The 15 minute ferry ride from the Old City harbour brought us to the UNESCO protected forest vegetation island.  We took the short walk from where the ferry docks to the ruins of a monastery, the kids were already loving the island as they found out that lots of peacocks roam around!

From the monastery we went into the botanical gardens where we managed to find some rabbits running around and a Hermann’s Tortoise ambling around the garden!  Despite 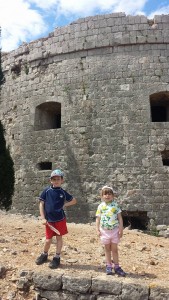 the steep climb up the ‘Path of Paradise’ in the heat we made our way up to the Fort Royal.  Build on the highest peak of Lokrum, the fort was initiated by the French army after the occupation of Dubrovnik in 1806.   The views from the top of the fort were well worth the hike!

After stopping for a picnic lunch (bring your own food and drink to the island as there are only a couple of small places to purchase food) we made our way to ‘The Dead Sea’.  This is actually more of a lake, formed by an erosional depression which was filled with sea during the youngest geological age, the Quarternary.   We took the opportunity to cool down with a swim before making our way to the rocks by the sea to clamber around.

The island provided almost a full day’s worth of entertainment and after catching the ferry back to the Old City Port we took the bus to Lapad for a meal in the evening.

We were up and out early today as we caught the bus to the Ferry Port to get a ticket to Lopud Island.  After finding the Jadrolinja offices to buy our tickets for the foot passenger ferry we had a bit of time to kill so the kids played in another local park close to the ferry port before it was time to board the ferry.

The ferry took about an hour to reach Lopud and our mission on arrival was to find our way to Sunj beach, a sandy beach in a bay on the opposite side of the island to the village where the ferry docks.   We had heard that golf buggies take you over the hill to the beach for a small fee but we walked the length of the village and there were no signs of any buggies.  After asking a local it turns out you have to walk a short distance on the trail towards Sunj beach before you see the golf buggies.  Off we set and sure enough there they were.  The kids loved the novelty of the ride and it was well worth it as we would have struggled to march our youngest along the trail to the beach.

The beach was everything we expected it to be.  A nice sandy beach which was shallow for quite a way out, allowing the kids to splash about and have fun in t

he sea and sand while we could relax.  There was a beach bar which served drinks, pizza and ice cream which was all we really required for our time there!!

In late afternoon we took a golf buggy back to the village where we had our dinner at a restaurant.  The kids played in the park while we waited for our ferry back to Dubrovnik.  The island is somewhere that you could spend a few days on, exploring the village along with the beach but it also made for a lovely full day trip out from Dubrovnik and the perfect end to our 5 day trip to Dubrovnik.

Three Nights in Prague With Children

Getting Scientific in Glasgow Science Centre Isle of Mull with Children